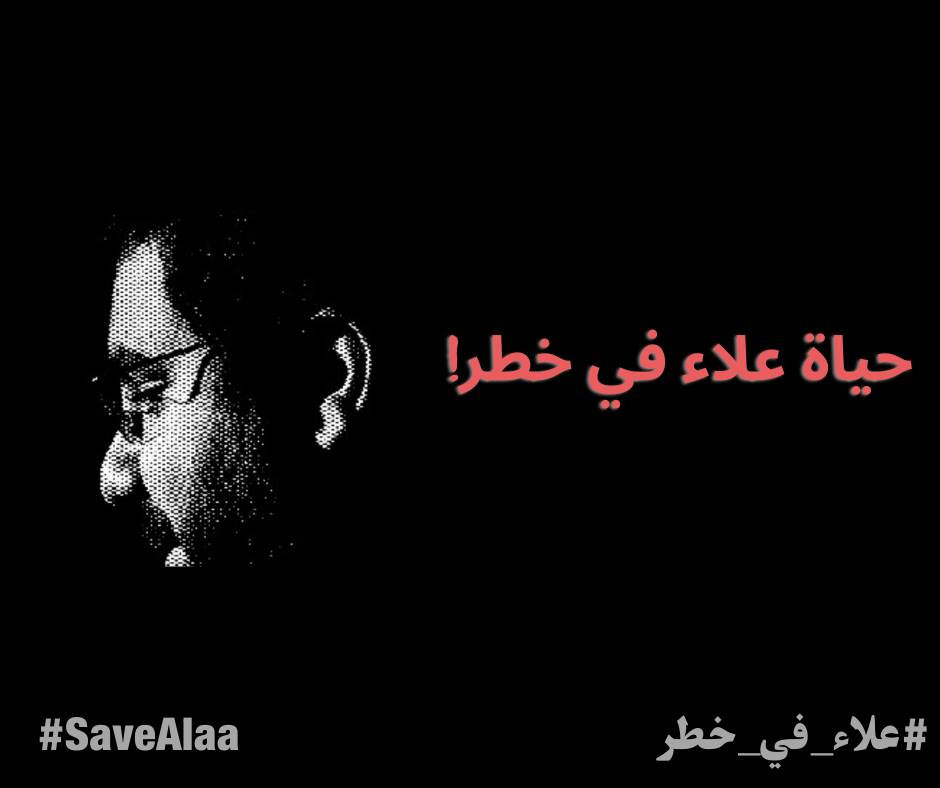 Distress message from Alaa Abdel Fattah, icon of the Egyptian revolution of 2011 and son of the mathematician Laila Soueif.

Statement by the family of Alaa Abd El Fattah:

Alaa’s life is in danger. He says he has reached a breaking point!

On Sunday 12 September Laila Soueif, Alaa Abd El Fatah’s mother, was at Tora prison complex to deliver supplies and letters to Alaa and to receive a letter from him. This is a weekly routine established since the arrest and imprisonment of his sister Sanaa on 23 June 2020. This time, however, the officer in charge informed her, without offering any explanation, that there was no letter from Alaa. After waiting for hours without any explanation, we opted for waiting till the next day, when Alaa was to appear in court for a review of his remand in custody, hoping to hear that what happened yesterday was a bureaucratic glitch. Instead, when we heard of what happened in court, and what Alaa told the judge and his lawyers we were struck with anger and panic.

Alaa was transferred today to the Institute of police sergeants in Tora in a separate private security convoy. Although he was held in a secluded cell -separating him from the rest of the prisoners – in the basement of the institute, he did not attend the hearing renewing his detention, and as soon as the session ended, they returned him to prison without presenting him to the judge or meeting with lawyers. After the lawyers insisted on seeing Alaa and explained the circumstances of what happened with his mother and our need to ensure that he is well, the judge ordered his presence, and it was done.

Alaa was surprised that the renewal of his detention took place and the session ended without him being present. He spoke about the continued violations against him in a Tora high-security prison 2, and his targeting by the National Security officer in charge there, and the failure of the prosecution to protect him and respond to his repeated reports and complaints. And he ended his words to the lawyers with a message to his mother, “Tell Laila Soueif to receive condolences for me”

Today, Alaa has been a prisoner in Tora High Security prison 2, pending emergency state security case 1356/2019, for almost 2 years, which is the maximum period of remand detention according to Egyptian law. It is expected that the case will be referred to court soon, because all indications confirm the state’s insistence on continuing Alaa’s detention indefinitely.

Alaa is held in a cell in a high-security prison, in very bad conditions since the night of his arrival in prison and the assault on him to this day. The severity – and the bluntness – of the violations practiced by the prison administration at Tora High Security prison 2 has increased exponentially in recent months towards all prisoners in general, and towards Alaa in particular, after we submitted more than one complaint against the prison warden, the head of prison investigations Wael Hassan, and the national security officer responsible for the prison, Walid Ahmed Al-Dahshan, known as “Ahmed Fekry” within Tora prisons.

All of the above, and bearing in mind that Alaa has been moving between the various Tora prisons since 2013 and the increasingly severe violations that he is forced to endure daily, under prison administrations that do not respect and are not subject to laws, a prosecution that completely ignores all our communications and SOS calls, and officers who are committed to continuing their crimes escalating the harm they are inflicting, is what drove him to this point we face today: the point where Alaa contemplates suicide.We, Alaa’s family, followed all available legal paths, appealed to all parties and officials, and used all means of peaceful protest to present our position and to demand an end to the targeting of the family and the abuse of its members, especially Alaa.

And now we find ourselves here: Alaa is in imminent danger, his mental health is failing after two years of careful planning and cruel implementation by the Ministry of Interior and National Security, and he sends a message to his mother to start receiving condolences for his death! His life is in danger, in a prison that operates completely outside the space of the law and in complete disregard of all officials, foremost the Public Prosecutor, the Minister of Interior, the Minister of Justice, and of course the President.

Save the lives of the remaining members of our family